TO SUBSCRIBE IN TIME FOR OUR WORLDS ISSUE, HEAD OVER TO SHOPINSIDENATION.COM TODAY! BONUS!!! SUBSCRIBE FOR 3 YEARS AND GET A 4TH YEAR FREE!!!

The GOAT graciously met with the media in Stuttgart with a pre-competition press conference and in the mixed zone following her record-setting gold-medal performances. Here are some of our favorite quotes!

On 2013 versus 2019: I came in as a rookie and not knowing what to expect and now going into 2019, I feel like I have a lot of expectations for myself and to uphold my name. It’s a little bit different, but I feel like it’s really exciting to go out there and represent myself and the country and hopefully do the best of my ability.

On her motivation after Doha (where she won six medals): It’s been really motivating in the gym to go out there and have better performances this year. I’ve had a couple of mistakes in previous competitions this year, so hopefully it goes better. I’m feeling a lot more confident with myself and with my routines, so I feel like this World Championships will go a lot more smoothly.

On her team in Stuttgart: I feel like this year our team dynamic is really strong. We have six really strong all-arounders and that’s different than any other quad I feel like, just because there’s only four named to a team so if you have an alternate, anybody that will replace somebody has to be a strong all-arounder. I feel like this year we have a lot of strength in the team on all of the events as well as the all-around. So any event that we go up, we can put any girl up and we’re not really afraid of the outcome. I’m feeling pretty confident with the six girls that we have here.

On being called the GOAT: I feel like if I were to label myself “the superstar” it would bring more expectations on me. I would feel pressured more in the limelight, rather than now where I just go out there and compete and try to represent Simone, not Simone Biles. Because at the end of the day I’m still a human-being before I’m Simone Biles “the superstar.”

On wearing the “GOAT” leotard at U.S. Championships: [Laughs]. I actually love that and it was kind of just a joke because everyone was picking at us like ‘who does she think she is?’ If everyone calls me the GOAT and I wore it, why is it such a big deal? So that’s why we came up with that leo. It was fun.

Coach Laurent Landi on coaching Simone and the challenges they have training:

Laurent: It’s been going well so far. You don’t have to think about it, otherwise you cannot do the job. My job is to help her… to develop her as much as possible, to help her reach her full potential. This is what we train to do every single day in the gym, my wife and I. We all knew the potential that she has, but of course, as a coach, it helps me because it’s another vision. When you’ve never coached somebody as talented as she is, it makes you better. It has its challenges, nobody wants to admit it.

Simone: I give him gray hair.

Laurent: We don’t need to talk about this now. It’s a challenge, but it’s a very rewarding challenge. It makes us reach very, very deep and find new answers to gymnastics pretty much.

Simone: I don’t know, I just stress him out sometimes, especially during meet weeks. I have my ups and downs with training, too. I’m not perfect. I feel like It’s a team effort, it’s not just me. It’s both of us as well as Cecile. So it’s not always easy on them when I come to the gym and do some crazy stuff.

On being THE star heading to Tokyo: I don’t know, I guess I didn’t really think of that. Going into an Olympic year or a non-Olympic year, I never really feel like I’m a big name because everybody puts that on me, I don’t put it on myself or I don’t really pay attention. So going into every year, I just try to be better than I was before.

On adding more medals to her collection: I never think of records. I just go out there and do what I came to do, which is compete for the country. Whatever the medal haul at the end of the day is… what it is.

On her overall performance in Stuttgart: I can’t be more thrilled with the performance that I put out at this World Championships.

TO SUBSCRIBE IN TIME FOR OUR WORLDS ISSUE, HEAD OVER TO SHOPINSIDENATION.COM TODAY! BONUS!!! SUBSCRIBE FOR 3 YEARS AND GET A 4TH YEAR FREE!!! 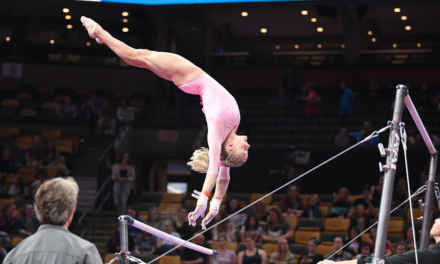 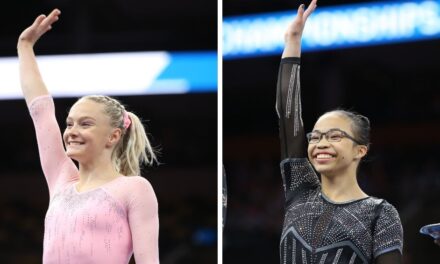