When Emily Gaskins takes to the floor exercise at a major competition, you’re instantly aware that her routine will not be cut from the same cloth as many of the others. This is no cookie-cutter style; this is ballet-infused beauty. There’s no one like her in the U.S. senior elite ranks.

It’s no coincidence that her choreography and poise are reminiscent of the graceful Soviet routines of bygone days. Ballet has always been a part of Emily’s life; her older sisters Allison and Kayla were classically-trained ballerinas who eventually transitioned to cheerleading at the University of Florida. “My oldest sister totally could have gone professional, but she decided to focus on school rather than ballet,” says Emily, who always attended her sisters’ ballet classes growing up. Emily grew away from ballet as well, choosing to focus on artistic gymnastics because she “wanted to tumble.” But she credits ballet with building a solid foundation for the rest of her gymnastics training. “I still take some ballet classes every now and then to keep it up,” she adds. “Sometimes I’ll do them with my sisters; we’ll [practice with] a ballet barre together. It just kind of stays with me.”

Emily began gymnastics at age four at American Twisters in Coconut Creek, Florida, and she made the move to Cincinnati Gymnastics Academy in fall 2012—a big step for a 12-year-old. While her mom moved to Ohio with Emily, the rest of her family stayed behind in Florida.

Under the guidance of legendary coach Mary Lee Tracy, Emily rapidly rose to the top of the U.S. junior ranks, securing a berth to the 2013 International Junior Mexican Cup and the 2014 Jesolo Trophy. But in 2015, she decided to return to Florida to train first with Lavinia Agache and then with Steve Nunno. “I enjoyed coaching her when she was here the first time, and I was really sad when she and her family felt a need to move back to Florida,” Mary Lee recalls. “But that happens in our sport, and so I moved on. [But] I would see her in competitions and I missed coaching her, and right after the holidays this year, she called me and asked me if I would coach her, and so I said I would love to.”

“Once I got older and learned how to motivate myself and what my goals were, I knew this was the place that would give it to me.”

“I’ve always loved [CGA],” Emily says, “and when I went [back to Florida]…I needed to go home and recover, and kind of find myself… and if this was really what I wanted to do. Once I got older and learned how to motivate myself and what my goals were, I knew this was the place that would give it to me.”

About a week after placing the call to Mary Lee, Emily had returned to Cincinnati. This January, Emily returned to the Ranch in Huntsville for her first national team camp since May 2016. Having just made the move back to CGA a couple of weeks prior, she didn’t have the best showing. “But she wanted to get back in the groove, and I think it was important for both of us to go and see where the rest of the USA national team member-type athletes were,” says Mary Lee. The next several national team camps were focused on selecting gymnasts for the spring international assignments, but Emily has been invited back for the April camp, which will be held on the 23rd-27th. “I think they’re going to be impressed,” Mary Lee adds.

“In general, my training’s going amazing,” says Emily, whose priority right now is upgrading her routines as she heads into the summer elite season. “[I’m] getting a bunch of new skills and connections coming together, getting in good shape again, and it’s going really well.”

“She wanted to get back in the groove, and I think it was important for both of us to go and see where the rest of the USA national team member-type athletes were.”

Mary Lee notes that most of Emily’s upgrades will come on bars and beam, while she’s planning to utilize skills that she’s done “on and off over the years” on floor exercise, where she will keep her choreography from 2016. “But on bars, it’s the connections [we’re working on],” she says. “She’s got a nice opening with the toe-full + shaposh + pak + shaposh. So that’s a real nice swing-to-swing-to-swing. She’s [also] doing an uprise into stalder full to stalder hecht.”

“I’m really excited about some of my bar upgrades,” Emily says, “because bars has [not been my strongest] event in the past, and I feel like I’m becoming a bars swinger now. I’m just excited to put these combinations together and get out there and show everyone that my bars are as good as my floor or beam. I think that’s what I’m most excited about.”

But perhaps the most intriguing of her upgrades is a new skill that was popularized across the pond, a D-level balance beam mount performed by Kelly Simm at the 2016 British Championships (video here).

“Nobody in our country is really doing it, so I haven’t said a lot about it,” says Mary Lee. “I went over and worked with Great Britain’s National Team in February, and they were all doing it.” The national team staff gave Mary Lee the progressions of the mount, and Emily learned it in about two weeks. “So that’s a really cool thing that she’s doing,” Mary Lee continues. “And her layout + layout is much better, and she’s doing a lot of the combinations. She’s got a great switch ring, and a side aerial + switch leap + split leap. You see how there’s all the three series combos now? She’s got a couple that are just beautiful.” Emily caps her beam routine with two back handsprings to a double pike. “She just looks beautiful and she’s very fit,” Mary Lee says. “I’ve got the same trainer that worked with Amelia [Hundley] working with Emily, so that’s been helping the process go a little bit faster. I’m really excited.”

“Nobody in our country is really doing it…I went over and worked with Great Britain’s National Team in February, and they were all doing it.”

Emily trains alongside Lillian Lippeatt, a promising 12-year-old who competed at the 2017 Nastia Liukin Cup and qualified junior international elite. Mary Lee calls them “really good training buddies,” and draws parallels between these two and a very famous duo she coached to Olympic gold in 1996. “It reminds me in a way of Amanda [Borden] and Jaycie [Phelps], because Jaycie was the little one who had all the energy and the youth, but Amanda was exquisite; she was beautiful and happy. So Emily is very much like that, I think that she has world-class quality. Lilly has got energy that pushes Emily a lot.”

Additionally, Mary Lee feels that she and Emily and Lilly work well as a team, because their passion for gymnastics is on the same level. “There is a synchronicity of energy between us,” she says. “We [recently watched] different parts of the junior meets in Canada, the American Cup, and Jesolo, and we studied the routines together, we got the scores from the Ranch… I like to coach athletes that are as passionate as I am, because then you don’t override them or they don’t override you as far as drive and desire.”

What’s next on Emily’s competitive radar? The Secret Classic in Hoffman Estates on July 29th, which will lead to the P&G Championships in August—the final big meet before World Championships in October. “That’s the ultimate,” Mary Lee replies when asked about Worlds in Montreal. “You always have to do the old ‘one step at a time,’ [but] I really feel like if these upgrades pan out and she stays healthy, I think that she will be in contention for a spot on that team.” She hopes that Emily will “try out a lot of new skills” before Worlds.

“I would say my main goal is to get on the national team and get on a World team,” Emily remarks. “That’s kind of what my focus is right now.” Beyond 2017, she’s looking toward competing in NCAA at the University of Alabama, where she hopes to find a different atmosphere than elite. “In the way of in elite, it’s all about how high of a difficulty can you get, whereas in college, it’s going to be nice just to take a step back and breathe,” she says, adding that she hopes to “enjoy every single competition” with the knowledge that she has teammates backing her up.

Still, Emily isn’t sure if she’ll head to Alabama directly after her graduation in 2018, because Tokyo 2020 looms in the not-so-distant future. “I definitely have that as a thought in my head,” says Emily. “It’s been more of a realistic goal since I’ve come back.”

Mary Lee agrees that while her protégé is uncertain about 2020, the idea of competing in the Olympics has been in the back of Emily’s mind since her return to CGA. “I don’t know [if she ever thought of it] as much before, I think it’s always been a dream [until now],” she remarks.

“I think that when 2018 comes around, [I’m going to] kind of see how I am, how my body feels, [if it’s] strong and everything, and how I’m doing internationally; all of that put together,” says Emily. “I’ll decide then whether I want to defer and go for 2020, or go off to college. But [Tokyo is] definitely one of those goals [where] you’re like, ‘I want that,’” she adds firmly. “And now it seems every day I get something better and I get closer to that goal.”

In Laurie Hernandez’s 2017 autobiography, she writes that her teammate Emily Gaskins “is a pure joy to be around,” explaining that Emily’s team spirit and energy helped to spur her on to success at the 2016 Jesolo Trophy. Mary Lee Tracy echoes the 2016 Olympian’s sentiments. “It is a joy [to coach her]. That would sum it up,” she declares. “[In Emily’s comeback], the biggest word to me is—joy.”

Emily’s joyful nature will certainly be instrumental as she strives for success on the elite stage this season, and it will be a joy for the rest of the world to watch her beautiful performances. 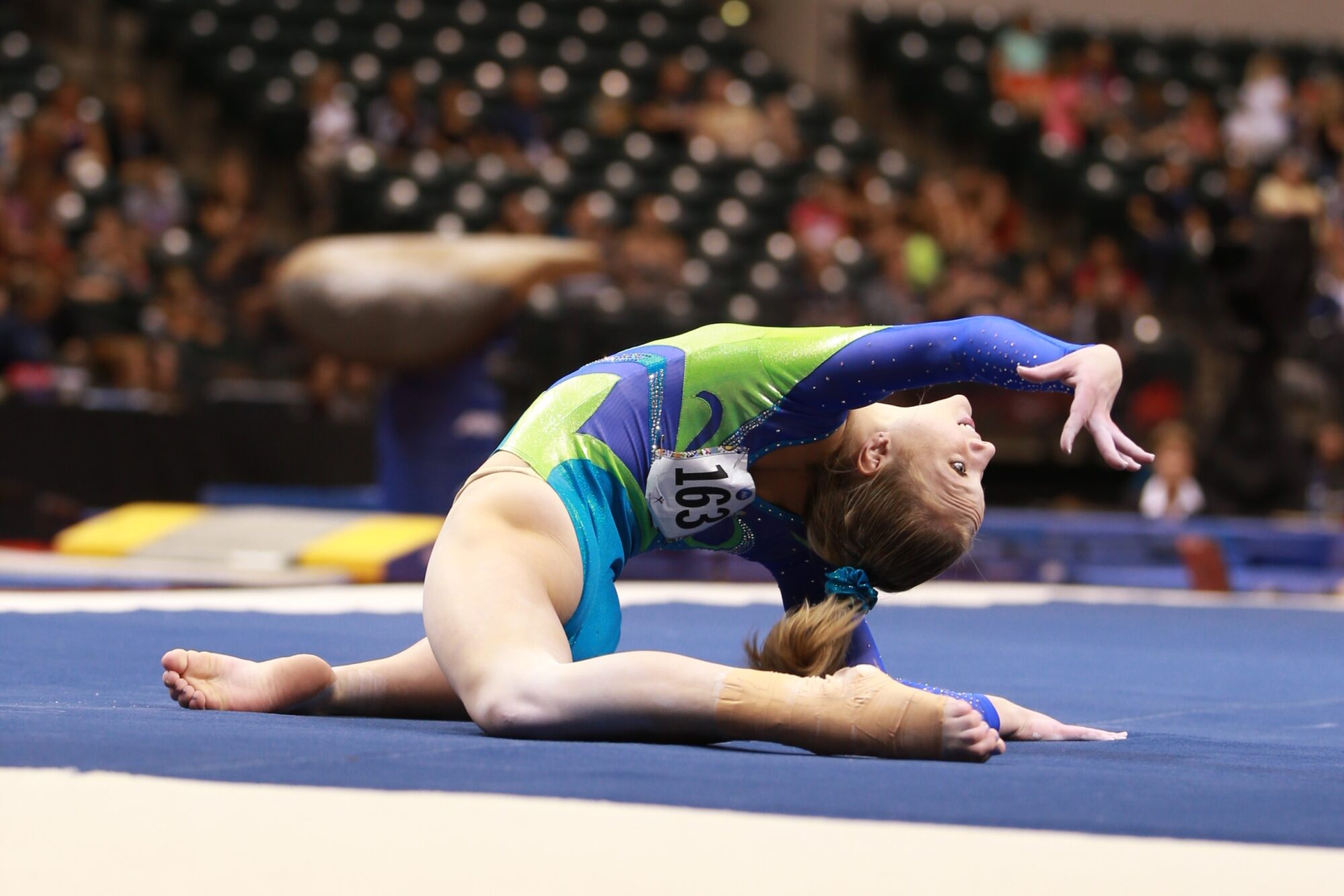 I Got This: To Gold and Beyond (Laurie Hernandez, HarperCollins 2017)

Mary Lee on Artistry vs. Power

While Mary Lee does wish there was more of an emphasis on artistry in elite, she acknowledges that there’s definitely room to include both ends of the spectrum. “I feel like it’s nice when a Code is balanced so that more of the powerful gymnasts can have success and so can the artistic,” she notes. “I don’t feel like it should weigh heavier on either side, I think they’re both cool; I think they’re both exciting to watch. You know, for the longest time—this is years back—but you had to be this tiny little petite, super artistic flexible peanut. It’s just nice now that the horizons are broadened to include all body types and sizes that are fit. And sometimes fit for one person looks different than fit for another person.”

“I admire Aly Raisman a lot,” says Emily. “Just her training and attitude. She’s probably one of the hardest workers, [and the] most determined gymnast I’ve ever met. Other than that, I love looking at the classical ones from years ago, even though they didn’t have hard skills.” 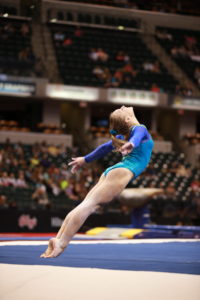 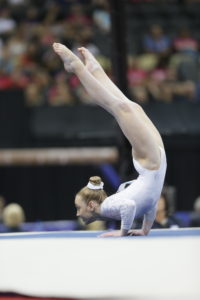 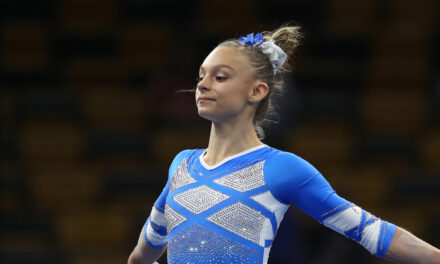 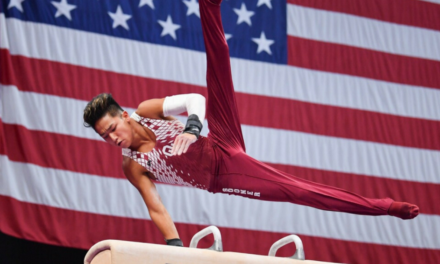 The Daily 8 – Mikulak Back in the Mix, Worlds Team Contenders and More 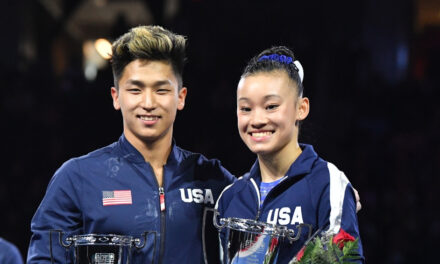 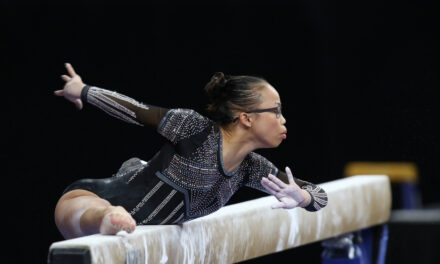 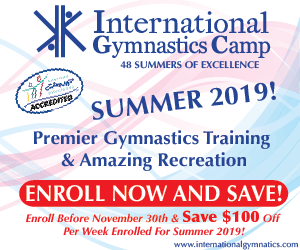